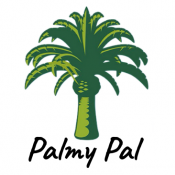 By Palmy Pal,
May 25, 2021 in DISCUSSING PALM TREES WORLDWIDE