"California Storms to be Unrelenting" 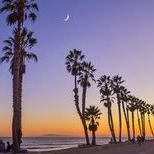