Queen after first winter in Virginia 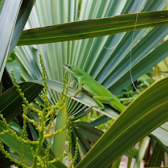